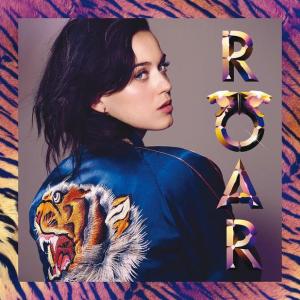 Considering her breakthrough single was the audacious bi-curious anthem “I Kissed A Girl,” it’s disappointing how Katy Perry has become the most vanilla pop star in the world. All the power to her, though, considering she’s racked up 10 US top-3 hits in the last five years with 7 of them hitting #1. It’s hard to argue with her results, but it’s easy to argue with her means. While her debut album, One Of The Boys, was eyebrow raising and guiltlessly infectious, it was more of the “what does she really have in store for us next?” sentiment that kept us interested. So then she unleashed the mammoth Teenage Dream album, which yielded 5 #1 hits tying (in a very “apples and oranges” way) Michael Jackson’s long-held record for most summit-peaking hits from a singular album. Then she took it a step further with a re-release that spawned two further hits, “Part Of Me” (#1) and “Wide Awake (stalling at #2.) There is absolutely no way to deny the success of Katy Perry as a singles artist, but the album itself was, realistically, lackluster. It was jam-packed with radio friendly jams that were going to be perfect for her target audience (let’s be honest, preteen and teenage girls) while providing incentive for her older following (including the gay community) to stick around. All Teenage Dream really amounted to was being a collection of instant gratification hits that were easy to toss aside when the next one came out. In theory, the project would have been just as successful had she not released an actual album and just put out the songs individually. Were any of them actually good songs, though? Put on your grownup pants, put down your drink, listen objectively, and you should reach a solid conclusion that no, they’re really not.

On the whole, the appeal to the tracks is found in the fact that Katy and her producers are masters at using every cheap trick in the book. Her songs dazzle with big melodies, huge, anthemic choruses, and easy to follow hooks. Let’s take a song like “Call Me Maybe” by Carly Rae Jepsen, for example. While it’s hard to consider the track the second coming of Mozart, you have to applaud just how well everything came together; it’s a masterfully crafted pop song. Compare that to any of Katy Perry’s Teenage Dream hits and it’s striking just how unimaginative they all are. The artistic peak of the lot was “E.T.,” which is actually a passable track, but compared to what else was happening in pop at that time, it’s a yawn-fest. The fact that you could take lead single “California Gurls,” drop it right on top of Ke$ha’s mega hit “TiK ToK” and they would line up flawlessly just goes to show how contrived and unoriginal these tracks are. Nonetheless, the public fell for it. No one could get enough of Katy for a solid 2 and a half years, and she could have seemingly kept going until every last track on that album was released. You can’t blame her as a “pop star” for laying out her career the way she has. A pop star can be very different from a musician or an artist, though. Someone like Lady Gaga has strived to (and has succeeded at) pushing boundaries and bringing a level of musical respectability to her work. Someone like Britney Spears is happy to hop on the assembly line and be the face to her hits, rather than the mastermind. Katy Perry has always sat comfortably in the middle, which has actually done her more harm than good. Lady Gaga is a polarizing figure, but a bonafide musician, noted and awarded for her output, while Britney Spears is shamelessly rooted for and respected as a monumental pop star. Katy is honestly just a famous singer with an excess of hits.

It doesn’t seem like she’s particularly been away too long, but Ms. Perry is back and ready to usher in a whole new era. Now, while it is always important to remember the context of who the artist is, what they’ve done, and what they were hoping to do, the right thing to do is always give them a clean slate. The Teenage Dream era was a massive success in the commercial aspect, but completely uninspired in the critical. Regardless of what she comes up with next, more likely than not, the former trend will continue, but it’s completely up to her whether or not she can earn some proper artistic integrity. Pop music is an art form all to itself, much like what’s found in any kind of media (sitcoms on television, for example.) It is, by nature, meant to appeal to the masses and define the culture of any given snapshot in time. Katy Perry is very successful in that aspect, but pop music is also music, too. It’s the times when the pop becomes art that the real magic happens. This is when, on television, you see the sitcoms that change society forever (I Love Lucy would be an exemplary case.) In a musical context, artists like The Beatles, Michael Jackson, Madonna, and Prince are prime examples. There is plenty of music that is well-known but isn’t pop, and there is plenty of pop music that isn’t well-known (a vast majority of it is stunning,) so the level of objectivity will always be there; good music will always be good. I am happy to praise Katy for her role as a “pop star,” but the music is the focus here, and that is the only vantage that is worth critiquing. The proof is always in the pudding when it comes to the success of one’s stardom, but the quality is always a little harder to dig into.

So giving Katy Perry her tabula rasa, we can listen to her new single “Roar,” the first lifted from her upcoming third studio album, Prism. The title is a bold one, almost as if to say she’s no longer her “Kitty Purry” alter-ego, but now a full-grown tiger. In addition, even in just a short period of time, there are new trends in the music world, and every opportunity for a Katy Perrenaissance for us all to get excited about. Just to reiterate, pop music can (and should) be fantastic. There is no sweeping “it’s just pop” write off just because of who the artist is; the expectation is always for quality in a musical context. “Roar” unfortunately misses the mark of that expectation on far too many levels. From the perspective of her clean slate, there is the same paint-by-numbers lifelessness about it that was felt upon hearing “California Gurls” for the first time. It has all the makings of a hit without embodying an ounce of excitement or momentousness. The lyrics are so cliché it’s almost laughable, and they’re hardly inspiring from a poetic standpoint, but her core fanbase is going to love them. Once again, Katy Perry is seemingly perfectly content being the middle of the road pop star who is just a little too good at making hits for the sake of having hits. Now, if we were to listen to the track without giving her the benefit of the doubt fresh start, this track is a complete disaster. The minuscule spark buried in her last single “Wide Awake” was completely snuffed out with “Roar.” There is absolutely no new territory being ventured into here, not even just for music, but specifically for Katy herself. Finally, and most shamefully, the song is a complete rip off of Sara Bareilles’ single “Brave,” released just several months earlier (and I don’t use that term loosely.) This is her second lead single in a row to be almost identical to another current pop song. Tsk tsk tsk.

“Roar” is destined to go on to be a hit, and that’s really ok. One avenue to having a successful record is always just making one you know people will like and buy, even if it means sacrificing all integrity. The preferred route, naturally, is to simply make great music, but the energy and effort that goes into that isn’t really for every pop star. This is really the beginning of the end for Katy Perry, unfortunately. She may have another wildly successful project… she might even have another one after this… but she has officially declared herself a fleeting moment in the galaxy of pop stars. The ability to sustain a long career requires reinvention and tedious attention to detail, neither of which comes across in “Roar.” If on her third album, she can’t hit that mark, then there really isn’t any hope for her. There’s no telling just how many more hits Katy Perry has left in her, but she really blew an opportunity to earn a level of respect to match her copious amounts of success. Instead, we’re stuck with another song that will be a huge success and leave less space for better, more deserving music to get its due. That’s the nature of pop music, and Katy Perry is officially it’s unfortunate poster child.